These are some of the important events in American history during the decade starting 1910.

The U.S. Presidents of the 1910’s were Woodrow Wilson and William Taft. William Taft was president of the United States from 1909-1913. After he retired from the presidency, he was selected to become Chief Justice of The United States. Taft was a conservative president. Another greatly remembered president was William Taft. Roosevelt’s popularity was at its peak as the campaign of 1908 neared, but he was unwilling to break the tradition by which no president had held office for more than two terms, so instead, he decided to support Taft on his campaign and finally won. 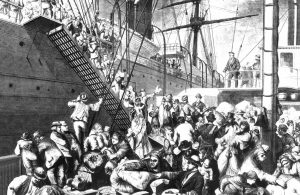 The Progressive Era lasted from 1895 until World War I. This was a period of unrest and reform. Monopolies continued in spite of the Sherman Antitrust Act of 1890. Social problems flourished in the U.S. During the 1910s labor unions continued to grow as the middle classes became more and more unhappy. Unsafe working conditions were underscored by the Triangle Shirtwaist Factory fire in which 145 female workers were killed. Children were hired to work in factories, mills, and mines for long hours in unsafe and unhealthy conditions.

Though efforts to pass a federal law proved unsuccessful, by the middle of this decade every state had passed a minimum age law. A commission found that up to 20% of the children living in cities were undernourished. Education took second place to hunger and while children worked, only one-third enrolled in elementary school and less than 10% graduated from high school. The status of the Negro worsened. Skilled negro workers were barred from the AF of L. Women were also striving for equality. The first suffrage parade was held in 1910 – the 19th amendment finally ratified in 1919.

In 1915, Alexander Graham Bell and Thomas A. Watson conduct the first telephone conversation between New York and San Francisco.

In 1918, Hostilities in World War I begin to end with the Austria-Hungary alliance for an armistice with the allies on November 3.

Armistice Day in Germany occurs when the Allies and the German nation sign an agreement in Compiegne, France. Woodrow Wilson would become the first U.S. President to travel to Europe while in office when he fails to attend the Paris Peace Conference on December 4.

The intellectual revolt against materialism spawned several books including those listed below (Books That Define the Time). The Education of Henry Adams assailed the nation’s failure to live up to its founders’ ideals. Walter Lippman and John Dewey were writing. Poets including Ezra Pound, William Carlos Williams, Amy Lowell, T.S. Eliot (The Lovesong of J. Alfred Prufrock), Robert Frost, Emily Dickinson, and Carl Sandburg.