The Chickasaw Native American Tribe culture and heritage is a very colorful one as it has mixes of its pure Native American heritage that is influenced by the other native tribes that they coexist with, together with the European lifestyle. This had paved the way for them to easily adapt to the calling of time as they adjusted to the circumstances in an orderly fashion.

They were considered as the Spartans of the Lower Mississippi Valley. This was because of the first contact that they had with the European explorers, spearheaded by Hernando de Soto in 1540. De Soto was surprised to know that there are people who are civilized enough to understand the very basics of community and brotherhood. 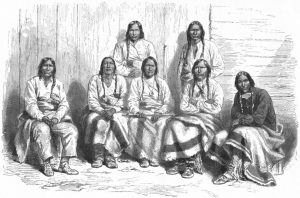 In their first contact with the Spaniards, they were living then in sophisticated communities as they had a highly developed ruling system that functioned as their government. They had laws that went with it, as well as their own religion. This surprised the group of Hernando de Soto, thus making them similar to that of the Spartans.

The Chickasaw Native American Tribe were successful in their trading business with the other Native American tribes. They were very literate in terms of financial and economic matters, making them excel in the trading field. They also made deals and negotiations with the French and the British as they traded horses and Pemmican for guns and gunpowder, further strengthening their defenses and securing them from other native tribe raids. They are an agrarian people that focused on agriculture and farming, although this did not limit their military capabilities, as they are ever ready to go to war.

They were also strong allies with the English during the war that they had with the French. This was the French and Indian Way. The English supplied them with arms and guns, together with the other native American tribes that partnered with them.

There are also some historians that give credit to the Chickasaws as they are seen as the ones who are responsible for making the United States as an English speaking nation. This is because of the fact that the Chickasaws adapted to whatever the circumstances need of them. They incorporated it with them, taking along the English language from the British to be in their culture. They shared this language with other tribes, thus spreading the scope of English speakers.

Other tribes forced to relocate were the Cherokee, Choctaw, Creek, and Seminole called the “Five Civilized Tribes” because of their highly developed ruling systems.

They are a member of the Five Civilized Tribes together with the Cherokee, Choctaw, Creek, and Seminole Native Americans. This is made possible with their highly complex ruling systems in their respective governments and politics.

The Chickasaws were the last to be part of this group of civilized Native Americans.

The Treaty of Doaksville is responsible for calling the Chickasaws to resettle with the Choctaw tribe located in the Indian Territory. This is where they spent time in rebuilding their tribe in a new settlement.