The Life of Chinook Indians:

As of now, there are no more Chinook speakers left in the world.

Fortunately, there are still some Chinook elders who have been passed down by the tradition of learning the Chinook Jargon. This is similar to the original Chinook language but was a little bit different due to the informalities and mix of other languages that are incorporated into it. It was considered to be a trade language of the northwestern coast. It is a mixture of the words, sounds, and vowels from the Chinook, Nootka, English, and other European languages such as French and German. For some, it is the total package.

An example of a simple Chinook Jargon word is the “Klahowya”. This is a friendly greeting that is used by almost all Chinook people in modern times to connote their connection with other Chinook people. 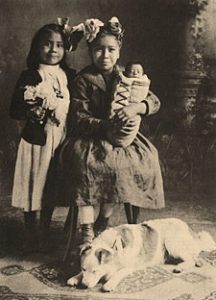 The Life of Chinook Indians

In The Life of Chinook Indians, the Chinook children of the past are living like normal children, as they go to school, do chores, and play with friends in their traditional playgrounds near their settlements. Letting the children enjoy their lives as children are important for the Chinook parents, as this molds and developed their kids to be responsible and productive in the future when they grow up.

Some are also obliged to take on basic adult responsibilities like hunting and fishing. However, this is only done when there is parental supervision, where their fathers usually guide them. Lacrosse was a popular game for Chinook teenagers. This is not only limited to teenagers as it was also a very nifty activity for the adult men as this was a form of exercise for them too.

Cradleboards are also used by the Chinook women, especially in carrying their babies on their backs. This is popular among all Native American tribes and this does not exclude the Chinook people.

The women were also responsible for gathering plants, as they used this for their food as a seasoning and for adding flavor. There are also plants that have medicinal properties. These were called herbs. These herbs are gathered by the women and given to the shamans to bless. Once blessed, these are then used by the shamans to heal various diseases of their fellow tribesmen.

The men were born to be skilled fishermen and hunters, because, in their early ages, they were trained to do the basics. This progressed through time.

There was no discrimination in leadership because men and women are equal in the eyes of the law. Thus, both genders can become leaders too. This shows the balance and equal perspectives of the men and women. Chinook society is balanced and the men are considered as equals of the women.