Native American Indians History originated from their nomadic to semi-nomadic living in the past. Records show that they came from Eurasia. During the early stage of the race, its key tribes are the Delawares, Iroquois, Seneca, Cayuga, Mohawk, Lakota, and Algonquin. These tribes have already settled in the American lands even prior to the arrival of the European explorers. They reached the land of America through Beringia Bridge. From then on, Native American Indians have spread all over America, making them comprise approximately 1.7 % of today’s American population.

They are distributed within the urban areas such as Chicago, New York City, Houston, Los Angeles, and many more. Their population growth has been very evident from the year 2000 up to 2010.  The major driver of this growth is through their interaction with other races, especially Alaska Natives. They have practically outgrown living within the premise of reservation.

Native American Indians are structured in a tribal style. However, these tribes often manifest similar beliefs and cultures. For the longest time, their cultural orientation is based on the stone-age era. Native American Indians have this belief that they are linked to the specific animal spirit; thus, they will be absorbed in this animal once they die. Moreover, animals have many uses for this tribe, with skins being used for clothing and for drum creation. Their high reverence for animals has ensured their effective and efficient consumption of meat. 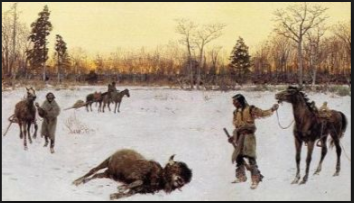 In relation to this animal spirit belief, the religion of Native American Indians is anchored to the philosophy of Animism. This belief is based on the assumption that living things in the world have their own souls, just like human being. This does not extend only to plants and animals, but also to thunderstorms, rains, mountains, and rivers; mostly natural elements. Aside from these, Native American Indians also have high regards to Shamans or Medicine Men, along with the different religious ceremonies, customs, festivals, and dances, all of which to show their dedication to their religion. Basically, the race’s religion is the strong contributor to their rich culture. Also, Native American Indians use smoke as one of their basic communication means, especially to other tribes in far proximity.

Native American Indians have diverse language, mostly depending on their tribe classification and location. Among the many are Navajo, Ojibwa, Cherokee, Blackfoot, and Choctaw. Through the years, the proliferation of the English language has threatened these languages. Fortunately, Native American Indian communities have constantly tried to preserve their own identity through continuous education of the youth using their own languages. However, as they continuously expose themselves to the metropolitan, the English language is already starting to get into their systems one step at a time.