The Chumash Style of Clothing on their own. Most of them, especially the men wore aprons that were woven from the grass or bark fibers. It is just a simple clothing that did not entirely covered their whole body. During the winter season, they used a specialized clothing that came from the skin of the animals they hunted. These animals included the deer (its buckskin), elk, squirrel, rabbit, black bear and also wild cats.

Overall, the garments of the Chumash people includes the fur robes for winter, the kilts or aprons for the warm season and leggings. However, In Chumash Style of Clothing, they also wore a one-piece moccasin that was partnered with long tops that were enveloped about the calf but in warmer weather, they did not use this instead they were barefoot. There were headdresses or crown-like things that were put in the head that was used for special occasions only. It was shaped in a circular manner that perfectly fit in the head.

This was made by a bound tule that was covered with fur. The middle section of the crowd was filled with a group of stylish feathers that was topped by feather plumes. Body accessories were also common to the Chumash people. They wore nose and ear ornaments that they had found in their environment. Aside from that they also know how to paint their body and face just like the tribe called the Mojave tribe.

The only color they had used were only those available on their land. They draw horizontal lines to their faces and their bodies. The color they used had come from different things. The white color came from the chalk deposits and the black color was obtained from the charcoal. The two colors were the easiest to make and it created a distinction between them whenever it was applied to the bodies and faces of the Chumash people. 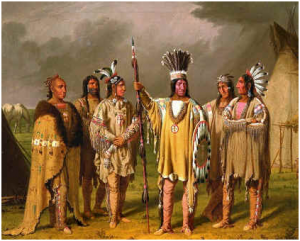 In the case of the women inside the Chumash tribe, they still had partly similar garments with the men. Some wore aprons but there are also some who wore skirts. It covered the lower front and their lower back. The aprons and skirts were both made from shredded willow bark. Ordinary clothes were worn every day but there is a time were special occasions had taken place in their lands.

In this kind of ceremonies, they wore special clothes. By special, it means that they had placed many ornaments on the simple cloth they had. They strung it with tassels, shells, and quills making it a very beautiful thing. Just like the men, the women of the tribe also wore twined tule slippers or moccasins that covered their bare feet. In the winter, they wove the fur from animal skin and made it as robes to provide the warmth. Ancient people indeed had some initiatives when it comes to surviving.

They had known about dressing fur robes in winter and also covering their bodies. They were also very creative as seen in their ability to paint their bodies and faces and even design their own special clothes.