1763 American History Summary,  The French and Indian War, known in Europe as the Seven Year’s War, ends with the Treaty of Paris. Under the treaty, France gives England all French territory east of the Mississippi River, except New Orleans. The Spanish give up east and west Florida to the English in return for Cuba. 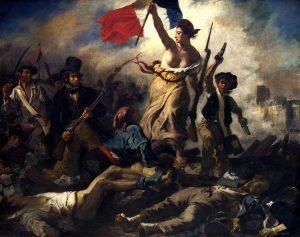 In the fall of 1763, a royal decree was issued that prohibited the North American colonists from establishing or maintaining settlements west of an imaginary line running down the crest of the Appalachian Mountains.

The proclamation also established or defined four new colonies, three of them on the continent proper. Quebec, which was of course already well settled, two colonies to be called East Florida and West Florida – and off the continent, Grenada.

These facts were established immediately, but most of the proclamation is devoted to the subject of Indians and Indian lands. It asserted that all of the Indian peoples were thereafter under the protection of the King.

The Proclamation of 1763 was a well-intentioned measure. Pontiac’s Rebellion had inflicted a terrible toll on the frontier settlements in North America and the British government acted prudently by attempting to avoid such conflict in the foreseeable future.

The Proclamation of 1763, signed by King George III of England, prohibits any English settlement west of the Appalachian mountains and requires those already settled in those regions to return east in an attempt to ease tensions with Native Americans.

The Governors and Councils of the said Three new Colonies were given upon the Continent full Power and Authority to settle and agree with the Inhabitants of our said new Colonies or with any other Persons who shall resort thereto, for such Lands.

It also stated that the Indians should not be molested or disturbed in the Possession of such Parts of the Dominions and Territories as, not having been ceded to or purchased by Us, are reserved to them or any of them, as their Hunting Grounds.

In practice, the Proclamation failed to stifle expansionist ambitions in the Thirteen Colonies. The Crown used the Quebec Act, 1774 as a device to re-assert its control within the Proclamation lands by extending the former boundaries of Quebec down to the Ohio River near what is now Pittsburgh, then down the Ohio the Mississippi and north of Rupert’s Land. This was one of the complaints advanced by the colonists two years later in their Declaration of Independence.