Bows and Arrows. About 8,000 years old, this is the most popular weapon of the Native Americans and perhaps the most used one around the world. An arrow is made of a wooden shaft with an arrow tip made of a small blade similar to a spear, only lighter and smaller. Some tribes attached feathers at the end of an arrow to stabilize its flight. The bow is usually made of a flexible material such as bone, wood, or horn curved with the ends attached using a tightly spun cord. Using the bow, the arrow is pulled back with the help of the cord. The cord which acts as the spring is released to shoot the arrow frontward.

Knives. This tool was used for hunting as well as in other tribe chores such as skinning animals. It was made of stone, deer antlers or bones attached to a wooden handle. Native American tribes later created knives made of iron or steel under the influence of European settlers.

Bolas. Bolas was used by Native Americans for hunting purposes. It was made from ropes or cords with weighted ends that are swung in circles and then thrown to animals, entangling them. The Native Americans from South America used this to hunt for guanaco as well as flightless birds such as rheas. Argentinian boys or gauchos use them until now to rope cattle. Qilumitautit, a lighter version of bolas, were used by the Aleut tribes and the Inuit to catch birds. Bolas were said to vanish long before the arrival of the Europeans in America presumably because bow making turned out to be more advanced. 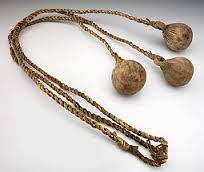 Pipe Tomahawk. It was a type of war ax that was also used as a smoking pipe. Like most striking weapons, tomahawks were used for close battles as well as throwing weapons. They also used this weapon for skinning animals because of its sharp edge. Overtime, pipe tomahawk became popular as a pipe rather than a weapon and also became ceremonial.

War Hatchet. The design is similar to a combat ax that was inspired by the axes used by the European settlers. It consisted of a sharp blade, made of stone and iron attached to a wooden handle.

Wooden Clubs. These clubs were commonly used by tribes from the woodland. It was carved from a piece of hardwood same as that of a mesquite which was similar to the clubs made from stone. The previous version was a wooden ball with a handle at the end until it was frequently sharpened looking like a wooden sword.

Stone Clubs. It was made of stone attached to a handle made of wood. Tribes had made different variations of stone clubs out of stone pieces. Flint and chert were the most common stones used to make stone clubs. Like the other weapons, stone clubs were also used for ceremonies aside from actual battle.