Most of the Native American Artifacts are extremely well-preserved although they are made of delicate materials like wood, fiber and hide.  Some of the collection has a high potential for research according to a research associate Laurie Webster of the American Institute of Natural History. The form of objects is a nightmare for many archeologists because it lacks documentation as to where and how they were discovered. Usually, stolen pieces do not come with documents unless those are hot off the printer.

In some instances, it is not clear if the relics are genuine. A case in point is the two human statues which are about 6 inches tall, made of corn shoot, wood and yucca cordage. One has a slight damage in between legs and the other one with an oversized erection. They were called “fertility figures” by the dealer and described them as from Utah dated around 200BC to 400AD. Webster initially thought that the figures were fake because she had never seen anything like that before. Upon closer inspection of the figures, she realized that the yucca cordage looks authentic and can be somewhere around 200BC to 400AD. She believed that the figures are genuine and perhaps an extremely valuable cultural piece. 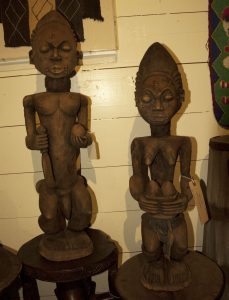 Another artifact, a colorful ceramic bowl, has a bittersweet tale. Its exterior has a flaming desert sun color while the interior has bold geometric shapes with black and red lines. It reflects the Salado style, which emerged around AD1100 and has blended elements of Hohokam, Mogollon, and Anasazi pottery. The bowl was slightly flawed by cracks and the more damaging “acid blooms” in the interior, indicating that someone tried to clean away old dirt by using contemporary soap. The perception that clean or restored piece will make more money on the market makes it very fascinating to collect the item because of the extent that people had to go through to make money.

Returning native American artifacts to the indigenous people from which they were taken will be given priority by the Bureau of Land Management (BLM) who has the custody of the artifacts collected throughout the years. Although the NAGPRA (National American Graves Protection and Repatriation Act) has very specific guidelines for the repatriation of artifacts, many Native American experts said the procedure will be difficult due to lack of documentation.

The repatriation effort of the BLM will take several years and once it is completed, they will find homes for the remaining artifacts. It plans to form a partnership with different museums so they can exhibit the artifacts and present opportunities for people to research them. Forming partnership with the museums and cultural centers of native American communities such as Navajo, Hopi, and Zuni is also part of BLM’s plan.