The Native American Indian History in Brief spans many thousands of years and, there is still much controversy in the scientific community as to exactly when Indians arrived in the America’s. Most Archaeologist; however, do agree on How the Indians got here originally. At some time between 60,000 to 25,000 years ago, a land bridge connected the Continent of Asia to Alaska in what is now the Bering Straits. During this long window of opportunity, Nomadic Tribes of Hunter, Gatherers are believed to have over time, crossed this bridge and spread through the Continent.

The most likely scenario is that the American Indian History story of their arrival was made by many different Tribes and Peoples over time, rather than a singular event of just one Race or Tribe arriving in some great Exodus. This in part accounts for the diversity in their cultures, languages, and lifestyles from even the earliest of Archaeological evidence of the civilizations that arose independently and, over time. One important footnote here is, the earliest any of these Indians could have arrived in America is around 12,000 years ago. At that time, the climate warmed significantly and, large Glaciers melted raising the Sea Levels to reclaim the land that once formed the bridge to cross.

American Indian History and Culture are filled with some of the hundreds of Tribes merging to form great civilizations and Indian Nations as they spread out to inhabit the different parts of this Country. It is also filled with a history of separations and Tribal Wars. Distinctly different cultures emerged over the years throughout the diverse environments this new Continent had to offer. The natural resources available and the climate of each region they would inhabit also had much to do with the way their different cultures evolved. 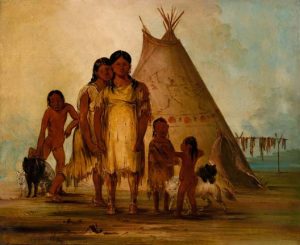 Before the arrival of Europeans, the Native American Indians had enjoyed a harmonious existence with nature here for thousands of years. There were even trade networks between Tribes and Nations stretching across the whole of the Continent. It is estimated that there were no less than 250 different languages at the time of Columbus’s arrival. Life for the Indians was soon to change forever. Spain, France, England and the Dutch were establishing colonies in their native lands and forcing them to relocate from the moment they first got here. The once great Indian Nations and Tribes were forced to deal with a new culture, technologies, diseases, alliances, and wars. Their way of life would never be the same again.

After many thousands of years of life in America, it only took 500 years to almost destroy a whole Race of mostly peace-loving people. It is a powerful testament to their will to preserve their heritage, traditions, and history that 567 different Tribes still remain in existence in America today. Anyone can now learn about American Indian History Online, where there are many different sources of information easily available. Many of the different Tribes host their own Homepage with a detailed account of their cultural history.