The History of Choctaw tribe was reported to start in the Mississippi and in some areas of Alabama. From the legends that have been told by people to people, the Choctaw people originated from NanihWaiya. NanihWaiya is said to be a sacred hill of the ancient tribes. Today, it is located near Noxapter, Mississippi. The meaning of NanihWaiya is the productive mound. It is also often mentioned as “The Mother Mound”.

The Choctaw tribe were mostly matriarchal. They considered women and honored them as the head and leader of their own families or households. As head of the family, they were expected to be the one to care for their husbands and children as well as the elders. Fortunately today, many Choctaw women are still practicing that.

In History of Choctaw tribe, there came a time that all American native tribe was forced to move into one place. Out of the five great southern tribes of the United States that were discovered, the Choctaws were the first one to go to the Oklahoma quarters. This was due because of the Treaty of Dancing Rabbit Creek in the year 1830.

Thousands of Choctaws moved from their homeland to another foreign land. To be exact, there were 20, 000 of them, walking through the land miles after miles. Many did not survive the removal. Some of them died because of starvation, dehydration and also exhaustion. That is why the removal of the native tribes was often called as “The Trail of Tears.”

Those Choctaw who had survived know how to adapt their new environment. During their stay, a lot of missionaries that came from different places came to the Oklahoma Territory. These include the Southern Baptists, Congregationalists, and Presbyterians. 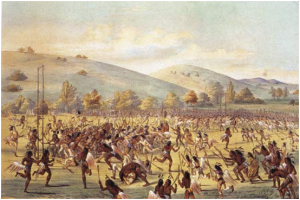 The Missionaries and the Choctaws had some friendly relationship with each other. They had somehow understood some of their culture and traditions and also to the things that were important to the tribe. They were really amazed at how much this kind of tribe values formal education. In their guess, if those people were born as white men then they would be one of the first humans who had undergone education in their early days.

People know that Oklahoma is a big place. Also, the Choctaw were so many at that time that was why they were divided into three. Some group was placed in Pushmataha, the others resided in Apukshunubbee and the last set of people dwelled on Mushulatubbee. Because of the great effort that the missionaries exerted during their association with the tribe, the Choctaw learned how to adopt wholeheartedly the new customs and values that the foreign people were teaching.

They had known another kind of government system and legal system of an unrelated racial experience. They also learned a new thing or two about agriculture and commercial practices that will help in a complex economic system. Also, the religion and code of morals that the missionaries introduced, the Choctaw accepted it rather quickly. To be exact, the Choctaw had somewhat trusted the Missionaries.