The Choctaw Native Americans, just like any other tribe has their own way of gathering and preparing their food for their family. Most of the food of the Choctaw includes crops of corn, beans, and squash. So that they could trade with other tribes, they had enough supply of surplus products. They were also great hunters, especially the Creek men. They hunted deer, wild turkeys, small game, and fish.

Food of the Choctaw Native Americans

Aside from being hunters and fishers, Choctaw also know how to plant and do some farming. Most women were assigned to farming and harvesting the plants they had planted. These include the crops of corn, beans, squash, and sunflowers. The Choctaw men, on the other hand, were appointed in hunting and shooting deer, wild turkeys and small game. Some of these men also go fishing to lakes, rivers, and sea coasts. The people of the Choctaw tribe had some talent in cooking. They had their own delicious recipes and the own way of cooking their food. These include cornbread, soups, and stews that were cooked on stone hearths. The Choctaw also know how to make their own tea. They always enjoy a tea of sassafrass.

Today, there is a dish called Pasha that is a Choctaw Indian own recipe. It is a soup that was made out of the cracked white of the cracked corn. This dish is mainly served in ceremonies and other special occasions. This food is also served during specific healing ceremonies. 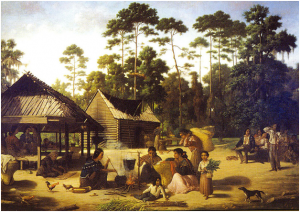 There are times that the Choctaw Indians make dug-out canoes from hollowed-out logs and used it for some other reasons. Though the truth is they did not often make it if there were no fishing trips. They use their own bare feet when walking in a land. They do not own horses at the time since North America did not breed some. The horses were only introduced when the colonists from Europe brought the animals over.

The only animal that helped the tribe in carrying their luggage and belongings were the dogs that they own. Nowadays, the Choctaw people can be seen in the city. Some of them even owned a car and knows how to use it. To be fair enough, there are also non-native people that still use the canoe for their transportation.

The Choctaws might be considered as one of those tribes who were really talented. Aside from having their own recipes and styles, they were also known for making their rivercane baskets and woodcarvings. When they were in their land the materials to be used in making baskets and woodcarvings can be easily gathered. But the time when they were forced to move to other places, they had a hard time finding the items they needed.

What they did is that they focused themselves on creating other traditional artifacts such as American Indian beadwork. When an individual would see one of their crafts, he or she would be in awe. They indeed have a very talented hand and artistic views and ideas.