There were a lot of different Native American tribes. Those with the same characteristics formed a nation or main tribe. Each tribe had their own customs, religion, and language. The different Native American tribes were grouped basically on the area they settled. There were a lot of tribes in the U.S. when Columbus arrived. Some of them are well-known like the Cherokee, Navajo, and the Apache. 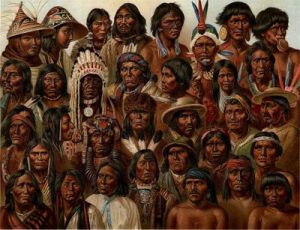 Where did the different Native American tribes live? 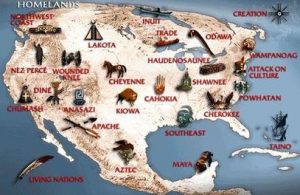 The Arctic has the harshest climate of all the regions. It is huge and stretches from Siberia throughout Alaska and Canada up to Greenland. The native tribes of the Arctic region include the Aleut and the Inuit.

The Plains contains a huge region in the central U.S. It ranges from the southern border of Canada to some parts of Texas. Most of the tribes here, especially the Sioux, were good horsemen and vicious warriors. The most famous tribes were the Arapaho, Blackfoot, Cheyenne, Crow, Pawnee, and Sioux.

The Northwest Coast region is a small area which includes parts of present-day Washington, Oregon, and southern Canada. The Tlingit, Makah, and Nootka were the famous tribes from this region.

The Southwest region includes the present-day Colorado, Utah, Arizona, New Mexico, parts of Texas, down to the Mexico. Most of the native tribes in the Southwest area were nomadic and relied mainly on farming to survive. The U.S. fought several wars against the Southwest tribes. They developed a status of being awesome warriors. The well-known Southwestern tribes include the Apache, Hopi, Zuni, and Navajo.

The Northeast Woodlands is also a very large area. This covers the area from the Mississippi River up to the Atlantic Coast, as well as from the Great Lakes up to the Tidewater area of North Carolina and Virginia. Most of the tribes here were the Native Americans who first came across with the Europeans during the New World. Through that, they played a huge role in early American history. The major tribes here include the Creeks, Iroquois, Narraganset, Wampanoag, Nauset, and Massachuset.

The Southeast Woodlands covers most of the southeastern parts of the U.S., from Florida to Texas, extending north towards North Carolina. The native tribes here varied and often developed complex and advanced societies. These were the Five Civilized Tribes which were the Creek, Chickasaw, Cherokee, Seminole, and Choctaw. They managed to settle by the river valleys and were mainly farmers.