The Cherokee history starts back when gold was being first discovered and Cherokee life was being invaded. The year was 1829 and President Jackson had ordered the Cherokee to be removed from the lands they had been inhabiting for years. They wound up in modern day Oklahoma, also known as Indian Territory.

This removal process was a great kick-start to the Cherokee Tribe History and their resilience to rebuild. The city of Tahlequah became their capital. The Cherokee had their own “gold” en moments in the years after their move. 1839 they established their very own constitution and in 1844 The Cherokee Advocate was introduced as their first newspaper.

When it comes to Cherokee Facts there is no shortage of information. They are a large tribe with a name that translates to “those who live in the mountains.” Besides being very important to history the Cherokee supported the Confederacy during the American Civil War. The Trail of Tears caused the death of thousands of Cherokee when President Jackson had them relocated during the winter months.

The Cherokee men and women both had roles within the tribes. The women farmed and took care of the children. They did make decisions based on the social needs of the tribes. They could even become peace officers while the men were the only ones that could become war chiefs. The men were the hunters and fighters, should problems arise. Political decisions were made by the men as well. These Cherokee Native Americans Facts create a strong bond with the tribes as well as their social interactions. 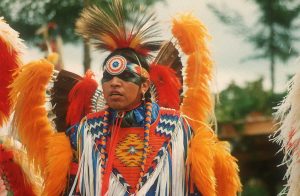 The majority of the Cherokee people speak English, but there are thousands of different languages of the Cherokee. This language is quite complex mixed with soft sounds. “Wado” is a great word to start with and it means “thank you.” The Cherokee also have a writing system called a syllabary which means it uses one character to represent each syllable.

Other Cherokee Native Americans Facts for kids include looking at how Cherokee Indian children live. They do everything that other kids do, especially hunting and fishing. Games are a huge part of their lifestyle. They throw a dart through a moving hoop and play a stickball game called Anejo.

An interesting part of the Cherokee tribes is that babies are carried in cradleboard carriers on their mother’s back. The baby is swaddled in a blanket and strapped to a flat board. This was especially helpful on long journeys.

Where did the Cherokee Indians Live?

Before the Trail of Tears, the Cherokee’s location was what covered a vast area of the United States. The land areas of West Virginia, Georgia, North Carolina, Tennessee, South Carolina, Virginia, Alabama, and Kentucky.  This was before the Europeans came in contact with the Cherokee in 1838. Today, where the Cherokee live is not on a reservation, but on land that they purchased in the 1800s. It is called Qualla Boundary located in North Carolina.

What did the Cherokee live in?

Weather played an important role in the Cherokee Indian houses that they chose and how the Cherokee lived. It seems that there is a belief that teepees were used, but that is not true. The Cherokee had one type of home during the summer and another in the winter. For the wintertime, their log cabins were covered with mud. This kept air and snow from making their way inside. In the warmer months, the shelter was larger with roofs made of grass and bark. This offered more light and air to the dwellings.

The first Cherokee weapons that come to mind are arrowheads. Flint was the most popular stone used to make them. Other notable Cherokee weapons include spears, stone weapons like tomahawks and battle hammers plus ax type hammers. Blowguns were used for hunting small game, however, sometimes they were used in battle. When darts were used in battle they were made poisonous from plant juices, extracts, or meat that had been tainted from snakes. These Cherokee tools gave the Cherokee the advantage during war times as well as the hunt for food.