Most historical and critical studies of the development of the American History Art have been based on some variant of John Fiske’s theory of “the transit of civilization.” Culture, the theory goes, is brought here from Europe by “carriers”-artists, writers, and musicians who migrate to this country from the Old World or natives who return after studying abroad. 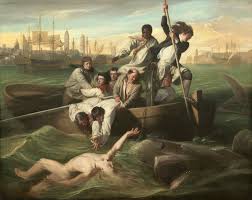 Thus American History Art and culture is regarded as an extension of western European culture, subject only to certain influences often thought of as more or less regrettable -inherent in the American environment. The principal cramping or limiting influences to which culture has been subjected in America, according to this theory, have been the lack of leisure among a people engaged in conquering the wilderness, the gross materialism fostered by the frontier and by industrial capitalism, and the reputed anti-aesthetic bias of our Puritan intellectual inheritance.

Many of America’s most distinguished writers produced works of fiction during the thirties. The list includes such names as F. Scott Fitzgerald, Ernest Hemingway, John Dos Passos, and Thornton Wilder. Some of the novels of this period explored what was happening in the country during the Great Depression. John Steinbeck’s The Grapes of Wrath chronicled the life of a displaced Oklahoma family who had lost its farm to the drought of the Dust Bowl.

James T. Farrell wrote a trilogy of novels about an Irish-American named Studs Lonigan and his attempt to rise above his poor beginnings. Richard Wright took on the issue of racial prejudice and the plight of blacks in Native Son. Erskine Caldwell’s novel Tobacco Road described the life of poor whites in the rural South. All four of these works were cited on the recent Modern Library list of the top 100 novels, in English, of the 20th century.

The term “Art Deco” has its origins in the 1925 French art exposition at Le Musee des Arts Decoratifs. The exposition was meant to be a display of nouveau design from around the world, but U.S. Secretary of Commerce Herbert Hoover declared Americans off limits from entering, as he felt no contemporary architecture was “new” enough.

Instead, Hoover sent experts to learn and adapt the exposition’s designs to American architectural expression. The ensemble included members of the American Institute of Architecture, the Metropolitan Museum of Art and The New York Times. Their reports along with the attendance of many American architects to the exposition address the swell of decorative treatments in American design between 1925 and 1941.

Beadwork: The American natives did not experiment with this form of art until the advent of the colonial powers. It was only through the Spanish and the Europeans that the Natives got exposed to glass seed beads which they began importing in great quantity. Soon enough the natives mastered the art of beadwork and were producing all kinds of amazing beadwork crafts.