Sometime after 12,000 years ago, there was a land bridge connecting Asia and the North American Continent. It is believed this is how Native Americans first arrived and spread throughout North and South America. Some of these nomadic peoples stayed in the North in what is now Alaska. They consisted of many distinctively different Tribes and cultures and first arrived in Alaska at different times in waves. Most of the earlier groups headed South but Alaskan Indian Tribes are believed to have descended from a third wave who spread out through the North and others went into what is now Canada. The name Alaska is actually derived from Aleut words that mean ‘the place where the sea crashes into the land’.

There are least 17 original major Tribes that are Native to Alaska and of course, over the centuries they branched apart into separate Tribes. Some of the predominant Tribes are the Inupiat, Yupik, Aleut, Eyak, Tlingit, Haida, Tsimshian and the Northern Athabaskan. Today, there are 227 Federally recognized Tribes in Alaska that live in separate Indians Villages as opposed to the Reservations in the lower 48 States.

One of the oldest Alaskan Tribes is the Athabaskans, they were the first to settle in the interior of the State. There are 11 groups of these people, identified by the languages they speak. All but one of these groups, the Yupikized, practice a Matrilineal culture where children belong to the Mother’s Clan. Heredity comes down from the Mother’s bloodline. They were a hunter, gathering and river fishing society and today they number 6,400. 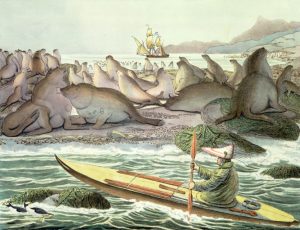 A major Alaskan Indian Tribes group is the Aleut, traditionally, they inhabited the islands of the Aleutian archipelago and the far west peninsula of the mainland. It is estimated they had a population of over 25,000 before European contact. In the late 18th century, Russian Traders built outposts in search of fur the Aleut could provide. Like all Native Americans, the Aleut had no natural immunity to infectious diseases the Europeans exposed them to and many died. Although today there are only 11,941 as of the 2000 census, full-blooded Aleuts are making a strong comeback from their decimated past. An odd chapter in their history is when the Japanese invaded Attu and Kiska Islands in the Aleutians during WW2. The Aleuts were gathered up and taken back to Japan and held as prisoners of war where many died.

Another major Tribe is the Yupik group of Indians known as Eskimos and is closely related to the Inuit and Inupiat Alaskan Tribes. These people helped to make the Kayak famous and fishing for Salmon, Seals, and Whales was a big part of their culture. Many of the now 22,000 Yupik who live in Alaska still practice their traditional hunting as well as their Shaman Religion. A unique custom of the Yupik among Indians was to name their children after the last person to have died in their community. There are also 1,700 Yupik who live in Russia and another 2000 living outside of Alaska.